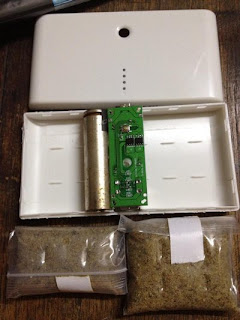 For those of you who frequently travel gadget mania , must be smart to choose a power bank observant and do not let the wrong purchase or wrong . Because there are still people who intend to take advantage fraudulent or large but with very little capital . I often borrow power bank on a friend , but to buy are still thinking twice deh . Haa.haa . an unpleasant incident when purchasing power is gadgeter bank of Taiwan .

As reported by kompas.com ( 06.04.13 ) , liver intention to buy a portable battery or popularly called "power bank " with a large , what power actually obtained a wad of sand . That's what happened a mobile gadget users from Taiwan .

Perhaps because of frequent traveling and not always be near a power outlet , the man reportedly bought a bank power capacity " of 24,000 mAh " made ​​a company from Shenzhen , China .

Brief look there's nothing wrong with the white power bank . There is a power button below the indicator lights and a USB port . Capacity is suspicious information that sounds too unbelievable .

Sure enough , once opened , turned on the power in the bank found two plastic bags filled with sand , which is likely deliberately placed there by anyone who makes it to give the sensation of " heavy " convincing .

Power bank can still be used to charge gadgets because it provides a power - dusty old cell . Original capacity is unknown , but most likely not reach 24,000 mAh claims written on the sticker on the bottom .

But it is not funny, when we feel that it is a tremendous power bank but when opened turns out it kilo of sand . But not too badly anyway if we can make hp charger , although it turns out is actually still below standard or that it should ..
Posted by Unknown at 7:30 AM No comments: